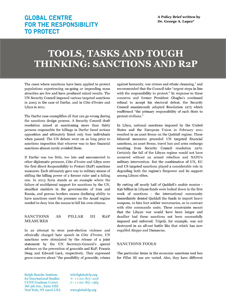 October 2013 - The cases where sanctions have been applied to protect populations experiencing ongoing or impending mass atrocities are few and have produced mixed results. The UN Security Council imposed various targeted sanctions in 2005 in the case of Darfur, and in Côte d’Ivoire and Libya in 2011. The Darfur case exemplifies all that can go wrong during the sanctions design process. A Security Council draft resolution aimed at sanctioning more than thirty persons responsible for killings in Darfur faced serious opposition and ultimately listed only four individuals when passed. The UN debate went on so long prior to sanctions imposition that whoever was to face financial sanctions almost surely avoided them. Côte d’Ivoire and Libya were the first direct Responsibility to Protect (R2P) sanctions measures. Each ultimately gave way to military means of stifling the killing power of a former ruler and a falling one. In 2013 Syria stands as an example where the failure of multilateral support for sanctions by the UN, steadfast enablers in the governments of Iran and Russia, and porous borders means declining ability to have sanctions exert the pressure on the Assad regime needed to deny him the means to kill his own citizens.