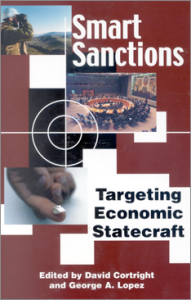 March 2001 – This report and the larger study it anticipates began in October 2000 as an extension of the ongoing sanctions research undertaken at the urging of UN member states to explore the possibility of an alternative to the UN comprehensive embargo against Iraq that had been in place since 1990. The investigation was prompted by the continued erosion of the economic sanctions and the possible breakdown of controls on Iraq’s production of weapons of mass destruction, which were in question after the December 1998 bombing of Iraq and the departure of arms inspectors there.

The report assesses the prospects for Iraq’s acceptance of UN Security Council Resolution 1284 and outlines other options for UN policy toward Iraq, including a restructuring of the sanctions in exchange for a reintroduction of inspectors into Iraq.