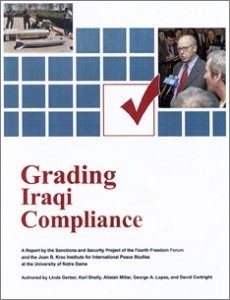 March 2003 – The U.S. and other governments contend that the United Nations disarmament process in Iraq is not working, and that Iraq has been in continued defiance of Security Council resolutions since the end of the war to liberate Kuwait in 1991.  This report presents an objective analysis of the Security Council demands on Baghdad that were embedded in its resolutions. It lists Iraqi efforts to cooperate with UN inspections and also identifies areas of inadequate compliance.

The report devotes special attention to the compliance mandates of Security Council Resolution 1441, passed in November 2002. The authors argue that significant steps toward Iraqi compliance with Security Council demands have occurred, especially with the work of UNMOVIC inspectors since 2002.  A chart published in this report  showing Iraqi compliance with inspections was reprinted in the New York Times just before the outbreak of the war.